skip to main | skip to sidebar

Lipka and Gifts from Heaven

After the sun has let up and the doors have been left open so that the beetles may join in on the evening fun Lipka has shared his gifts from heaven.

I have spent almost the last two hours watching a movie named "Zelary". My daughter brought it home from the library. Lord, I have come to love foreign films with subtitles. It is the second one I have watched this week. In this particular case, I have paused the movie for I know something sinister is about to happen and I wish to be no part of it. At least, not until I get these thoughts out of my head.

It used to be I would say "get these down on paper." For the sake of speed, accuracy and legibility I am preferring the computer to paper most days. Journals carried with me are most preferred for as I find too often I can not hold onto the exact words long enough to record them.

So, Lipka...what are his gifts from heaven and why did I feel the need to stop the movie to share them with you? Really, the movie is about the main character who saves a man's life and ends up married to him. Why focus on Lipka?

Lipka is the poor boy who is beaten by the live in mate of his mother. I can not fathom a mother who would stay with a man who would do such a thing. Lipka receives gifts from heaven that lifts his spirits and helps him through winter. At least, that is what I would like to believe. I paused the movie after he shared blocks of his chocolate aka gifts from heaven and it is only the beginning of winter. The pause is because I do not want to see the ugliness that I believe is about to unfold before me.

We are exposed to so much ugliness daily. I know I will return to the movie but why sour the sweet words that need to be put into press before they leave me? The lady who has married this man out of necessity is becoming to love him. Imagine 1943, the underground, a house with no electricity and a city girl is smack dab in the middle of it falling in love with what the villagers refer to as an old goat.

I do want to know what happens next. But I wanted to share Lipka's gifts from heaven with you first. Such a simple thing, sharing the chocolate. Bittersweet, melts on your tongue and for just a moment your able to escape to a better place. A place with no terror, no empty cupboards and no lack of love.

Remember Lipka as you go about your day. A poor boy with whiplash marks on his back, chocolate stashed in his home made of cedar branches in the middle of the forest in the winter and no family to call his own and yet he shares his chocolate. 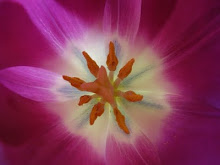 Super close up of a lovely tulip! 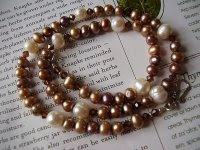 I am an insomniac

I am addicted to beads 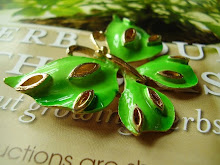 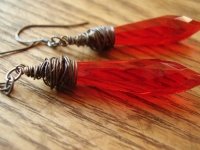 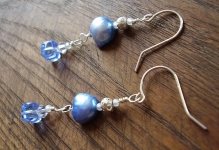 Handcrafted lovely pearl and glass earrings by yours truly!

Check out my hits!

My Copyright! Because I said so :)

Cities I have been